Our Lady of the Patronage, Zacatecas, Zac.

THE CITY OF MARY

The Shrine of: El Patrocinio, Our Lady of The Patronage,

Zacatecas is one of those places that travel writers rave about. A mountainous city in north central Mexico, it’s a place of superlatives. Considered one of the finest of Mexico’s colonial cities, it was once the largest silver-producing city in the world and for three centuries was one of the country’s most prosperous areas—“disgorging fabulous wealth” from its mines. 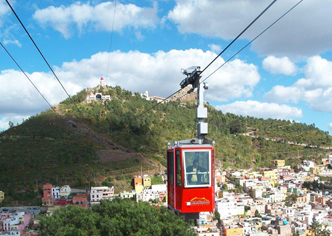 And it may be one of the only places in the world whereyou can go to church—by cable-car! It is renowned for having the only cable-car system in the world to traverse an entire city. And that cable-car leads directly to the shrine of El Patrocinio , a small Marian shrine majestically situated atop the Cerro de la Bufa (Hill of the Bufa); the Bufa is a “dramatic outcropping of rock” which overlooks Zacatecas and its environs. With its altitude of 2,667 metres, the Cerro de la Bufa is a strategic landmark for miles around.

This shrine is closely tied to the history of Zacatecas: The statue of Our Lady of Patrocinio, the Patrona of the city, was brought from Spain by the Spanish Conquistador, Diego de Ibarra; it was present in 1546 at the founding of the city by Juan de Tolosa and three other Conquistadores(soldiers). 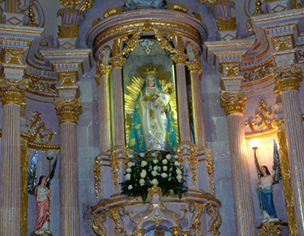 In 1588 Spanish King Felipe ll commissioned a coat of arms for the city; prominent on the shield was an image of the Virgin Mary: She was depicted atop the hill of the Bufa, between the moon and the sun. The four founding Conquistadores are standing sentry at the foot of the hill. A painting of this crest is featured on the main page of the MADONNAS OF MEXICO website.

The symbolism on the shield can be traced back to a tradition that is almost 500 years old: Initially, the Chichema Indians were terrified of the Spaniards. They took refuge in the Cerro de la Bufa , where they hid in the woods, fortifying themselves with supplies and weapons. Then came the events of 1530: All the town was astounded that year by a dazzling vision in the sky—“a Lady of great beauty appeared on the Bufa with a child in her arms.” She urged them in a voice full of kindness, to make peace with each other. Everyone present was startled, indigenous and Spaniards alike, and shouted, Milagro! Milagro! (Miracle! Miracle!). As a result of this apparition peace ensued between the two groups and the conversion of the Zacatecans to Christianity proceeded tranquilly.

Their initial evangelizers were the Franciscans; Friar Jeronimo de Mendoza built the first church on the site in 1603. Before that time the church had been a small hermitage.

In 1707 the Franciscan Apostolic College for the Propogation of the Faith was founded at Guadalupe, Zacatecas (Guadalupe is practically a suburb of Zacatecas), by the saintly Franciscan missionary, Fray Margil de Jesús. The College was founded for the express purpose of evangelizing, not only the indigenous peoples of Mexico, but also the future citizens of California, Texas, and Arizona. Franciscans from this college sent priests to the church of El Patrocinio for the next 150 years, until 1848. That marked the year of the infamous Reform Laws in Mexico, laws which expropriated many Catholic churches and church property in the country, Included in this expropriation was the Apostolic College of Guadalupe; it is now an Art museum.

The Zacatecans have received numerous favours throughout the centuries from their Patrona, Nuestra Señora del Patrocinio : On many occasions, in times of epidemics, drought, calamity, natural disasters, war, and revolution, she was led in procession from her hilltop mount to the Cathedral of Zacatecas.

The statue is made of cedar wood and measures 1m. 25 cm. in height. It is enshrined above the main altar, flanked by elegant columns. Neo-Classical architecture dominates the interior of the sanctuary. The church has undergone several renovations in its lifetime with the present church being completed in 1795. And the views from the shrine of El Patrocinio overlooking the city? They are superb, panoramic, and— as befits Zacatecas, that city of superlatives—heavenly!

The statue has received church approval at the highest levels: It was crowned canonically with the authority of Pope Paul Vl. In 1967 Cardinal Jose Garibi Rivera solemnly crowned the statue of El Patrocinio in the presence of 15,000 of the faithful.

“Zacatecas has always been the city of Mary,” he said. “Right from the beginning.”

This article is reprinted with permission from THE CATHOLIC REGISTER