Our Lady of Ocotlan – “The Lourdes of Mexico”, Tlaxcala, Tlax.

In 1531 Our Lady of Guadalupe appeared to Juan Diego in Mexico City and left her miraculous image on his cloak. It was a spectacular apparition and resulted in the conversion of millions to the Christian faith.

Ten years later—10 th anniversaries are always significant—a second spectacular apparition occurred in Mexico: that of Our Lady of Ocotlán.

In 1541, the city of Tlaxcala (an hour and a half east of Mexico City) was devastated by a smallpox epidemic in which 90% of its citizens died. Tlaxcalan Indian Juan Diego Bernardino worked at the nearby Franciscan convent—the first to be established in the country. On Feb. 27, 1541, he was out fetching water for his sick relatives. He was utterly astonished when a “beautiful lady” appeared directly in his path. She spoke of a miraculous spring that would cure everyone of their illnesses. “I will help all who are suffering,” she promised. Sure enough, all who drank the water were cured. Within days, the epidemic had vanished. But that wasn’t all—

The “beautiful lady” had also given him a message for the Franciscan friars: “Tell the monks that they shall find an image of me—through it I will bring forth my blessings.” The friars were skeptical: Where would they find such an image? And did such a thing even exist? 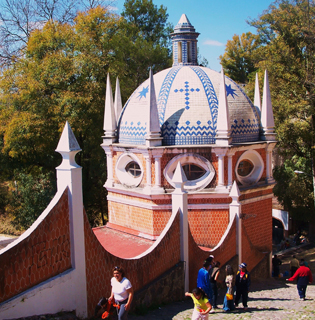 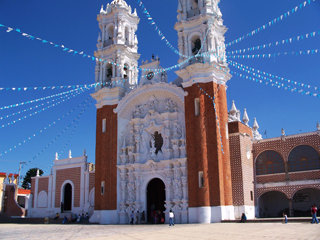 By a series of mysterious signs, however, their attention was directed to one particular tree. The friars had been shocked by two strange events: Not only was the forest on fire, but one particular tree was not being consumed by the flames. Once the fire dissipated, they proceeded to investigate: When the friars took an axe to this tree—in the presence of a multitude of witnesses—they discovered a wooden statue of the Blessed Virgin inside the tree trunk. All fell to their knees in awe and wonder.

The statue, almost five feet tall, was carried in joyous procession to the church where it resides today above the main altar in the shrine of Our Lady of Ocotlán.

The apparition has received the approval of the Church at the highest levels: Five popes have expressed belief in the authenticity of the 1541 miracle, from Pope Clement Xll in 1735 to Pope Pius Xll in 1941. In 1755 she was declared the Patroness of Tlaxcala. Later, the shrine was elevated to the status of a basilica. In 1906 the Holy See authorized the liturgical crowning of the image of Our Lady of Ocotlán.

It is not surprising that the Tlaxcalans should be so favoured: They played a pivotal role in the Spanish Conquest, allying with the vastly outnumbered Spaniards against the mighty Aztec warriors. Bernal Diaz, in his firsthand account, The Conquest of Mexico,describes the Tlaxcalans as “fervently loyal.” They were not only the first “friends” of the Spaniards in the New World, they were also its first Christians. The first diocese in the country was established here in 1526.

Travel writers call the church “stunning” and describe it as “one of the most beautiful churches in Mexico.” Historians cite it as a “masterpiece” of the late Mexican-Baroque style of architecture known as Churrigueresque, named after the Spanish architect, Benito de Churriguera, who dominated Spanish architecture for the first half of the 18 th century.

In Mexico this architectural style intensified and reached its most striking and elaborate expression. The purpose of such design was not frivolity: rather, it was to give effusive and exuberant praise to God. The single-naved basilica is a profusion of gold! Everything seems to be decorated in an array of gilded, richly carved swirls, scrolls, flowers, grapes, shells, vines and garlands. The twin-towered church façade features hexagonally-shaped red bricks combined with brilliant white stucco ornamentation.

Pilgrims to the shrine can also pay a visit to the Capilla del Pocito which houses the miraculous well. Here, in the charming blue and white octagonal chapel, they can obtain the same healing water that cured the townspeople of the smallpox epidemic so many years ago.

Other miracles abound: During a 1987 celebration Bishop Luis Munive Escobar of Tlaxcala witnessed changes in the colour of the statue’s face, a phenomenon observed by many visitors to the shrine.

“Are there healing miracles going on today?” I asked the sister in charge of the chapel. “Oh, yes!” she said, “but far too many to recount. But why should we be surprised? Our Lady always keeps her promises!”