The city of Monterrey was founded in 1596 by Spanish official Diego de Montemayor and he named it in honour of Our Lady: La Ciudad de Nuestra Senora de Monterrey , Our Lady of Monterrey City. 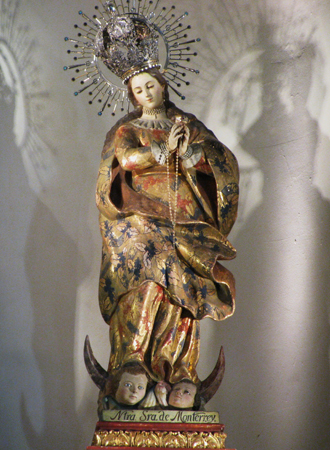 Monterrey, the third largest city in Mexico, is a prosperous and bustling city of three million inhabitants, known for its state-of-the-art technology. Only three hours from the Texas border, it is the most Americanized of Mexican cities. The city is surrounded by the rugged Sierra Madre Oriental mountains and is dominated by the Cerro de la Silla ( “the hill of the saddle” ), a craggy, distinctively-shaped mountain peak which is visible to all. It has become the city’s emblem.

Monterrey’s central plaza is one of the largest in the world, more expansive than Red Square, St. Mark’s Square or thezocalo in Mexico City: It is the result of an urban renewal program in the 1980’s in which scores of downtown buildings were demolished to create a new “space.” And—it worked! It is beautiful—a green oasis graced by fountains, monuments and historic city buildings. The “plaza” is not, indeed, a square: called the Macro Plaza, it is an elongated “park,” six city-blocks-long and almost one hundred acres in size. At one end of the plaza is the “resplendent” 18 th century Cathedral of Monterrey, home to the adult-sized exquisite statue of Our Lady of Monterrey.

Her origins are sketchy: Many believe that the ancient statue was based on the image of Our Lady of Monterrey which is venerated on the major altar of the Cathedral in Monterrey in Galicia, Spain. To celebrate the Marian Year of 1954, Mexican Archbishop Espino y Silva decreed that the statue be restored “in a style which completely duplicates its primitive appearance.” This mission was accomplished—and is apparent to the visitor to the Cathedral to the present day.

Blessed Pope John Paul ll visited the Cathedral in 1990 and prayed before the image. A round tile depicting his familiar papal shield was placed in the floor of the Cathedral to commemorate the event. To celebrate the 400 th anniversary of the foundation of the city of Monterrey, Cardenal Suarez Rivera crowned the image of Our Lady of Monterrey with papal authorization. Which is only fitting: After all, the city was named after her! 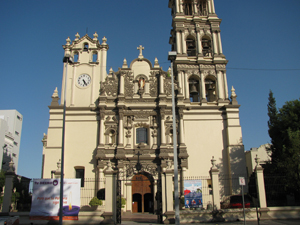 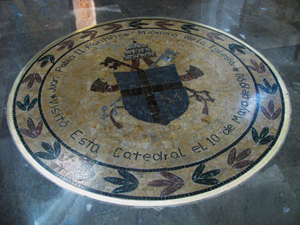 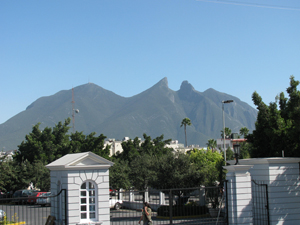