Tourist books rave about the church of the Assumption of Our Lady of Cupilco. They call it “the most beautiful church in the state of Tabasco.” Words such as “stunning,” “exuberantly painted” and “a gem of Mexican folk-art” complete the picture. How could I resist such a place?

And they were right. It was glorious. 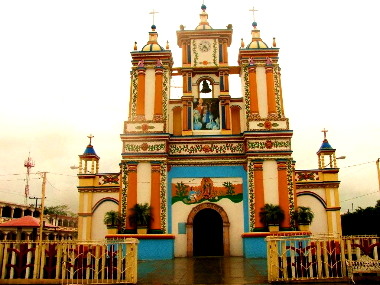 What I hadn’t counted on was the rain. Torrential rain. Thunderous, pounding rain, as my taxi slogged its way through the 40-minute drive from the capital, Villahermosa. There was no rain when we left the city but the sky was a menacing mass of sombre slate-grey clouds. Five minutes out of the capital the rain began, at first only a benign pitter-patter on the windshield; then the deluge began in earnest. Psalm 77 came immediately to mind: “The clouds poured down , Your thunder rolled round the sky, Your flashes lighted up the world.” And then some.

I thought we would never make it. And this was my last chance and only chance to see such a wondrous church. I was leaving early the next morning to catch a flight to Veracruz. What a disappointment! And photos? Out of the realm of possibility, I realized now.

But make it we did. The church lived up to all expectations. It is a prime example of what is referred to as the “painted churches” of Tabasco, a style indigenous to Tabasco and two or three other states in Mexico.

The first thing you notice as you enter the church —after you revel in the extraordinary and colourful facade– is the statue of Our Lady of Cupilco: it is life-sized and stands above the main altar, over the tabernacle. She is famous in these regions: So venerated is Our Lady of Cupilco that Pope John Paul went out of his way to pay her a visit in 1999 and personally crowned the statue in a solemn ceremony. This scene is painted on the upper facade of the church, above the tableau of the apparition of Our Lady of Guadalupe to St. Juan Diego; the Guadalupe event was painted by local artist Angel Izquierdo Oructa in 1967. These vibrantly painted tableaus blend with the lavishly sculpted stucco ornamentation which decorate the rest of the facade. In the arcaded interior, columns are arrayed with relief sculptures of Our Lord with His crown of thorns and the Infant Jesus. 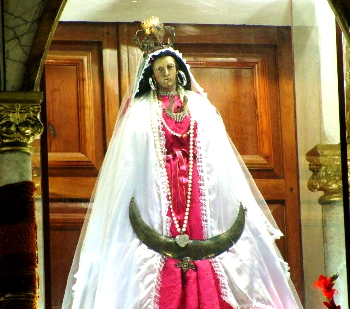 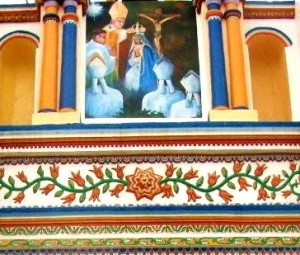 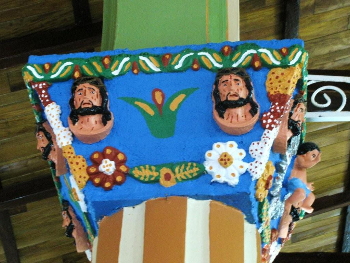 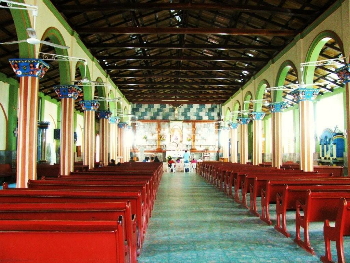 Every year on the feast of the Assumption, on August 15, the statue is taken from its position above the main altar and is processed through the town accompanied by throngs of devotees. Hymns, prayers, rosaries, flowers, candles, bands—all are part of the festive celebration.

According to tradition, the statue (known as Our Lady of the Assumption) was discovered by fishermen in 1634. It was found in a rowboat on the shores of a nearby lagoon and then taken to the church in Ayapa. All noticed a strange phenomenon: several times at night the Virgin would change position— She would turn to face the town of Cupilco! Church officials, realizing that the statue wanted to be in Cupilco, moved it there where it has resided ever since. Although there has been a church in Cupilco since Colonial times, the existing one is relatively new; it was built in the early 1900’s.

In the photo gallery on this webpage you will see another example of a “painted” Tabasco church: this is the blue and white church in the next-door town of Mecoacan Ayapa.

The state of Tabasco experiences unusually high amounts of rainfall. Flooding is not uncommon. In 2007 a major flood affected over a million people and 80% of the state when the Grijalva river overflowed its banks. In some areas water levels rose to four metres. During my bus trip from Campeche through Tabasco I noticed extensive flooding as well (although not of the severity of the 2007 floods)—much of the farmlands resembled rice paddies. In low-lying areas I saw cars almost totally submerged, and cattle and horses standing chest-high in muddy-coloured waters. It was an unforgettable and surreal landscape. Parts of the state—but not Villahermosa—had been declared a disaster area.

Our Lady of Cupilco is known for her miraculous powers of intercession. Major miracles. Minor miracles. Everday miracles. And the photos? Against all odds—they “turned out.” 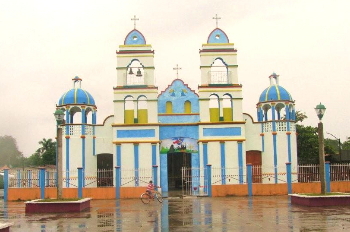 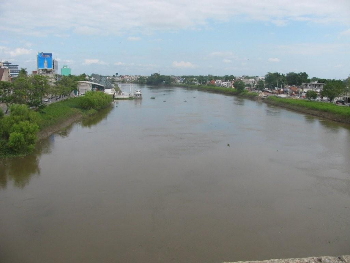 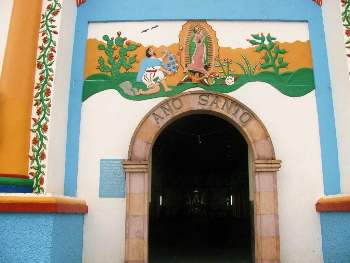